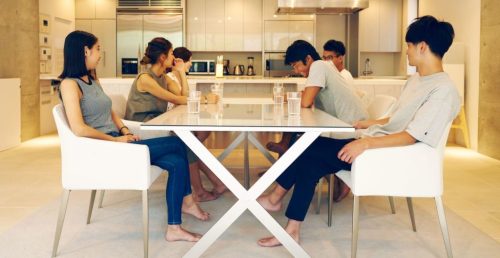 As a long-time veteran consumer of reality TV – the good, the bad, and the very ugly – I understand the war such entertainment wages on your psyche all too well. The primary appeal of this trashy television genre is that it requires zero effort on the viewer’s end. There’s no witty banter or complicated plot line to follow. There’s just not-so-subtle innuendo, questionable fashion, and best friend betrayal. But if you think this fluff doesn’t leave an impact on you once you stop watching, you’re incorrect.

Admittedly (and with shame) I have spent countless hours of my life staring at my screen, mouth agape, and brain cogs at a standstill, mindlessly enjoying the insipid drama offered by shows such as The Hills, The Real Housewives of Beverly Hills, or Keeping Up With The Kardashians. While the bulk of what these shows offer is harmless, there’s an underlying toxicity that makes its way into our own reality. Post-binge my mood is restless and aggravated, suddenly argumentative and ready to attack. Our brains, not unlike our appetites, are constantly absorbing what we put in front of them. Unsurprisingly, if you binge on a greasy and noxious meal of trash TV, you’re going to be left to suffer the queasy and unsettling consequences. Thankfully not all reality TV shows are created equal.

Terrace House: Boys & Girls in the City brings three young women, and three young men – complete strangers – together in a beautiful home in Tokyo where they cohabit, go about their daily lives, and maybe even find romance. You come to learn each member’s hopes, dreams, and most importantly their ‘type’ – what they’re looking for in a significant other. All these tidbits are public knowledge in the house, as there’s no behind-the-scenes confessional. Rather than humiliating challenges and feats of strength, the entertainment is supplied by fairly mundane tasks around the house, thoughtful meal preparation, visits to the cast’s places of work, and most importantly, their dates with one another. Once a cast member reaches some level of self-actualization, and is satisfied with their Terrace Houseexperience, they tend to leave at their own free will. No one is voted off the island, though they are swiftly replaced with the next house member.

You quickly fall in love with watching the 6 cast members, even if some aren’t your cup of tea. The interruptions from the commentating panelists, who are essentially pop culture savvy and wickedly hilarious versions of the Greek fates, become increasingly welcome. But mostly you become utterly fascinated by the polite rituals, customs, behaviours, and communication of the cast members. If you’ve ever watched western reality tv, you know polite has nothing to do with it.

The cast members of the Real World or any one of the housewives are completely ruthless and their relationships with one another are anything but real, as their titles deceptively proclaim. They didn’t come there to make friends, they came there to win! They’re quick to back stab, smack talk, and jump into bed with their best friend’s love interest, always at the ready to tear their so-called friends down. On Terrace House, not only do they considerately greet and converse with one another, but they’re always willing to lend a hand and build their fellow roommates up.

When unscripted drama (I use this term loosely, as the drama never really surpasses a soft boil) does occur, those involved sit down, confront the issue like adults, and talk it out until a resolution is reached, and both parties feel as though their feelings have been respectfully acknowledged. Not only that, but their powers of empathy and emotional intelligence are astounding – constantly deciphering their own and other’s feelings and expertly putting themselves in the shoes of their fellow cast mates to better understand a situation. It’s admirable and a completely novel concept for a reality show that helps to set Terrace Houseapart from all the garbage.

If you’re looking to cut down on the trash you typically consume, but – like any good self-proclaimed social anthropologist – are fascinated by different forms of human interaction, Terrace House is an absolute must. Rather than being left with the toxic whiplash the shallow minds of traditional reality tv spawn, you will feel refreshed and maybe even pick up some new polite mannerisms. Watching Terrace House never leaves me feeling cynical about the state of our society, nor the trashy tastes we can’t seem to quit.

Instead I am inspired by their friendships and aspirations, and ready to watch the next episode, unencumbered by the spontaneous bad mood the usual trash TV incites. While you can’t tune out the same way you do with the primetime junk (one must remain vigilant of the TH subtitles), you’re provided a form of enjoyable entertainment that is free from stress and pernicious influence. Just don’t be surprised if you find yourself a) booking the next cheap flight to Japan or b) spiralling into a deep Instagram search for your newest crush from the cast. No one is immune to the super kawaii powers of Terrace House.

All 54 amazing episodes can be found and binge watched on Netflix.

This entry was posted in CELEBRITY, CULTURE. Bookmark the permalink.