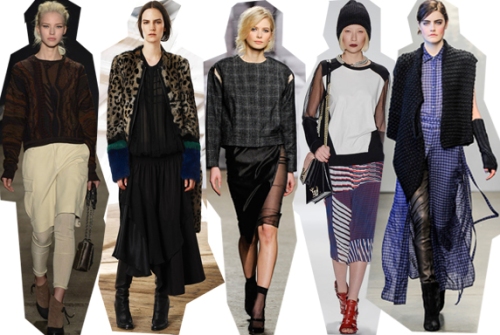 One of my all time favourite t.v. shows has to be My-So-Called Life. At the time the show was originally aired I was 6 years old and not quite of the Angela Chase era. However, in high school the Family Channel aired re-runs late at night, and I instantly became hooked. There are countless reasons why I enjoyed the show, many of which having to do with Jared Leto’s character, Jordan Catalano (Jordan Catalano’s choker, Jordan Catalano’s hair, Jordan Catalano’s wall-leaning skills, Jordan Catalano’s dyslexia…), but also the cast’s wardrobe was pretty rad.

Claire Danes skulked around in loose fitted, burgundy babydoll tees, with plaid shirts tied around the waist, and her bestie, Rayanne Graff, was always sporting interesting getups that involved denim, daisies, macramé, and braids. The show acted as a time capsule of the 90’s, and with it the Seattle sound sub-genre.

Last February when the Fall 2013 collections were being shown, I was tickled pink (or more appropriately maroon) to see grunge return to the runway. Saint Laurent featured melancholy floral dresses covered in slouchy plaids, and chunky boots, while the Mulleavy sisters showed loose tie-dyed garments beneath heavy, black motorcycle jackets at their Rodarte show. I was a huge fan of the haphazard layering, mis-matching of prints, and believe that to pull the look off correctly is a feat in self-styling.

Many wrote the look off, claiming it was too trendy and wouldn’t last, but I’m hear to report that it seems as though this Fall 2014 season, grunge (or at least a more contemporary version) is alive and well.

February 7th, 2014, the day designers showed us that they were still interested in showing the street style inspired look of plaid and chunky knits for another season, and I couldn’t be more pleased. This season’s “Grunge” or as I think I’ll refer to it, “Urbane Alternative”, is a little more polished than last season. The layers are less disorderly, the palettes more harmonious, and the plaids slightly lighter. As well, there’s more transparency to the ensembles with the inclusion of sheer fabrics.

Rag & Bone (one of my favourite shows of the day) offered interesting layers including chunky knits (cowichan and all), ink blotted textiles, muted buffalo plaid, and exposed thermal tights. There was an alternative air to the collection, though it was more refined and urban in it’s overall mood.

Preen Line showed a tender, put together take on the grunge of seasons past, featuring classic plaids in bright greens, reds and blues, but what really caught my eye were the tennis-sweater inspired cuffs and use of leopard print. The florals were less ditsy, and the silhouettes presenting more sway than the babydolls of yester-season.

The Nonoo collection was definitely a more polished take on the alternative style. The tartans were prim and the styling more purposeful and structured, but the colour palette as well as the cut-out take on plaid was fitting to this new Urbane Alternative.

At the Tess Giberson show, an angst-filled tone was set. Long, slouchy cardigans were put atop crisp, white-collared shirts and sleek leather skirts. Again, the grungey feel was less directly undertaken, but the dark palette, slouchy knits, and and checkered prints were a welcome interpretation of last season’s more obvious references.

Lastly, there was Rebecca Minkoff‘s collection. I wouldn’t go so far to say that these are the duds grunge gals will be sporting come Fall, but this girl’s look can most certainly be described as alternative. She’s more rock-and-roll and a little less nostalgic. The collection still inspired a harder attitude, albeit with a feminine side as well. The separates in this collection were varied, beautiful, and incredibly wearable. I think any city-girl would kill to have these pieces in her closet.

Perhaps this season’s Urbane Alternative will be more palatable to those who didn’t applaud the referential looks of Fall 2013. It will be interesting to see if the reimagined trend and its encompassing mood continue throughout the other Ready-to-Wear collections.