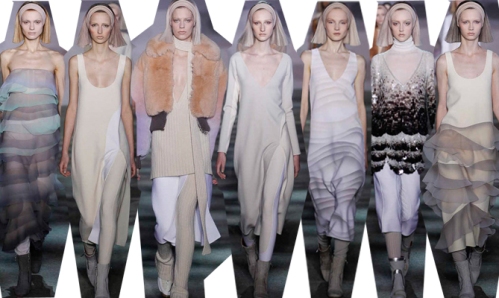 Not that I’ve ever actually been to fashion week, but from what I hear, the Marc Jacobs show is one that everyone most looks forward to. I can understand why. The sets of his shows are elaborate and take the viewer to another world, while the clothes themselves are always beautiful and interesting. I just finished watching the live stream of his Fall 2014 collection, and I feel as though I’ve been hypnotized.

The stage was set as though the viewers were in the sky amongst a ceiling of artistic clouds. A truly dreamy landscape. This is what is so amazing about the atmosphere at a Marc Jacobs show. His vision is articulated so clearly that attendees find themselves placed in the middle of his dream, partaking in his innovative imagination. Last season we were witness to an ominous, shipwrecked frat party, where the garments took cues from the Victorian Era. This season I felt as though I was viewing a parade of the women of a futuristic Aldous Huxley or sci-fi Margaret Atwood novel. They were outfitted for a time that is beyond the present, in confections that may have never even entered our consciousness until now.

I don’t often plan in advance to sit down and watch the runway from the screen of my MacBook (logistics issues on my part), but I’m so happy I did. It could not have been a more fitting show to end New York Fashion Week or to discuss on my blog, where I’m constantly exploring the dreams that enter my mind. The entire atmosphere had me in a bit of a trance. The Kid A-cum-Fourtet xylophonic chiming combined with the spoken word of ‘Happy Days Are Here Again’ made for a completely spellbinding experience. I think the entire reverie created put the viewer into the right mind-space to observe and appreciate the collection.

I found the presentation to be very symmetrical. The show started with the light sound of what seemed like rain falling, then the models entered wearing a palette of serene mid-tones. Throughout the middle of the show the looks were made of heavier material, as well as darker colours, these were who I imagined to be the ‘dream warriors’ of this futuristic society. The stream of models then finished off with lighter than air creations, and when the show came to an end, the applause of the crowd mimicked the sound of rain that had introduced the collection…it all came full circle.

To begin, I loved the overall look of Jacobs’ models, with their blunt bobs of soft pastels, frosty cosmetics, and barely there eyebrows. It gave them an extraterrestrial quality that only enhanced the mood. I was particularly fond of the long, monochromatic tank  dresses at the beginning of the show that were worn over thick leggings. I could see these being worn by all types of girls. The detail throughout the collection was really amazing, especially the sorbet-esque, ombré shearling jackets. They looked like clouds that were lit up and reflecting the colours of a soft sunrise. The long tank dresses at the end of the show were beautiful. The effect reminded me of what the coloured sand on Jacobs’ planet would look like when it shifts and ripples with the wind. The soft, almost iridescent ruffles on the dresses that ended the show were so elegant and beautiful. Not to mention the dazzling sequined pieces. This isn’t to say that the heavier pieces in the middle portion of the show went unappreciated. The full knit looks (minus the neck scarves) looked so cozy and chic, while the combination of sheer fabrics and heavy twills offered an intriguing attitude.

Viewing Marc Jacobs’ world is always an enthralling experience. Tonight’s collection really transported you to another dimension, where our tastes functioned at an unusual, and transformed frequency. If this is what we’ll be wearing on the sand dunes of another planet, then sign me up for a seat on the space shuttle. Marc Jacobs gave us a vision of the future, and the future is good.