Take Me Out To The Met Ball

There are certain events every year that cause you to wake up early the following day in order to troll the interweb seeking the dazzling photos of the previous night’s delightful fashions. The Golden Globes, Coachella, and the Oscars provide such excitement for those of us who worship at the altar of style. But for true fashionistas who know their stuff, The Metropolitan Museum of Art’s Costume Institute Gala OR put more simply, the Met Ball, is the crown jewel of such events. Tonight the gala is centred around the Met’s Charles James: Beyond Fashion exhibit, which will surely mean we can expect to see billowing and beautiful ball gowns on the red carpet. Apparently Anna Wintour wants this year’s soirée to be as sophisticated as possible, and is enforcing a ‘White Tie and Decorations’ dress code for the male attendees. Though this may stifle the gent’s personal style aspirations, it is sure to ensure some exquisitely cut suits and unbelievably snappy dressing. 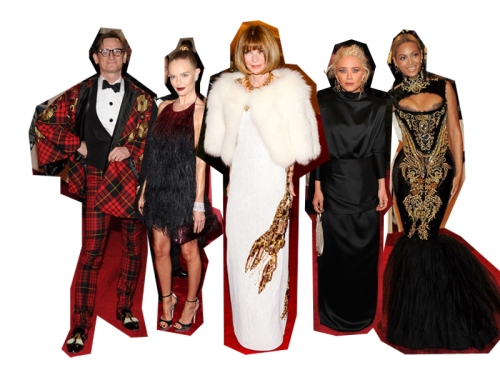 Past galas have been based on Punk themes (2013), Prada meets Elsa Schiaparelli (2012), and Alexander McQueen’s Savage Beauty (2011). My winners of the night tend to be those that embrace the theme wholeheartedly. At last year’s Punk: Chaos to Couture ball, the gals sporting heavy eyeliner and thinking that fulfilled the ‘punk’ requirements outweighed the ladies who expertly embodied the punk mentality and resulting look (Nicole Richie, Mylie Cyrus, Linda Fargo). Typically the red carpet looks that bring to mind over-worked prom dressed are my least favourite. However, taking this year’s theme into consideration, we are sure to see many prom-like silhouettes, though hopefully they will remain true to the sophistication and elegance of the Charles James aesthetic. 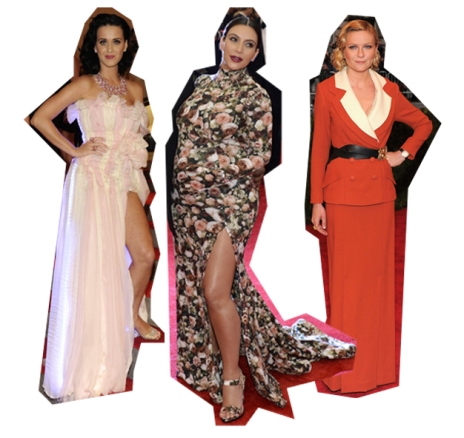 Like any other red carpet, there are always a few looks that find no cozy place in my heart. In 2010, Katy Perry’s light-up CuteCircuit dress was not as cute as the label might suggest, though she still looked stunning of course. I am a true and sincere fan of both Kirsten Dunst and Rodarte, but this look from the 2012 Met Ball, was a disaster. She looked like Mrs. Clause. And of course, who can forget last year’s red carpet, where Kim Kardashian wore head to toe, all-over floral Givenchy. Riccardo Tisci is a genius, and I am a fairly firm believer in Kimye’s style tastes, but what on god’s green earth was this trio thinking?! Hopefully this year will bring opportunities for redemption for each of these gorgeous women.

I’m looking forward to tomorrow morning when the gowns (the good, the bad, and the ugly) are up on Style.com, and the designers’ muses are known to all. What’s better than escaping to a far off fantasy red carpet, and getting lost in the sparkle and glamour of it all?