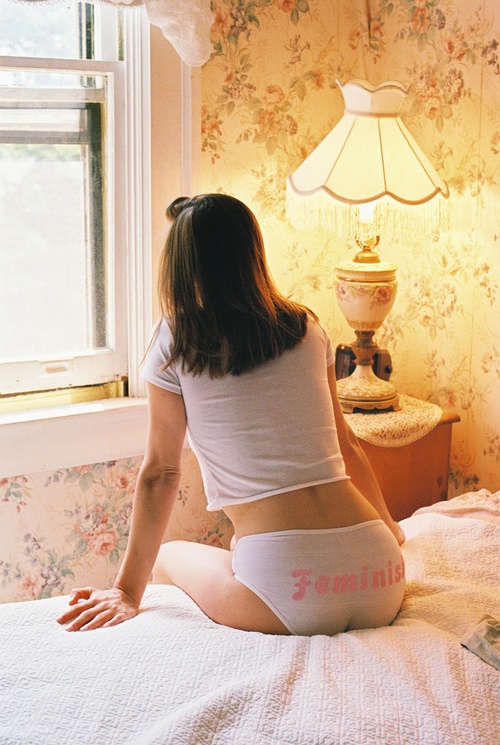 Being a girl means being many different things at once. It means that at a certain age you discovered the joys of covering things in glitter and colourful stickers. It means feeling rad as hell when holding an electric guitar in your arms, despite your level of talent. It means loving getting your nails done just as much as you love carrying a canoe on your back (and perhaps chipping said nails). It means having a closet full of your favourite colour, whether that be pink, black, or plaid, and rocking it on the daily. It means being able to do an impressive number of push-ups, but not always being able to open the jar of almond butter you so desperately crave. It means benefitting from an emotional intelligence many boys will sadly never know, while also having that same sensitivity devalued or used against you. It can mean whatever you want it to mean, but the older I get, the more I experience and expose myself to, the more I realize that to certain people, what it means to be a girl is set in stone, and with those expectations comes a less than savoury treatment.

First things first, let me set the record straight – I am not a man hater. I love men. Do not let my ranting fool you. I spend oodles of time thinking about men. Thinking fondly about men from my past, thinking about cute men who walk by me, thinking about my dream men, thinking of the men of my future, thinking about Mentos..all the men. I’m lucky – many men in my age cohort are evolved, identify as feminists (know that that just means equality…), listen to and empathize with the double standards and expectations others of their sex may assign to me. But that doesn’t mean the whole bunch are one of these progressive specimen.

Yesterday I happened upon a blog post that was circulating the Internet, that was speaking to women on such a significant level. I found it very enlightening and eerily echoed experiences/feelings I’ve had as of late. The post I speak of is ‘The Thing All Women Do That You Don’t Know About‘, written by Gretchen Kelly. It talks about women minimizing their reactions, de-escalating, or shrugging off uncomfortable, dangerous, or inappropriate comments or behaviours by men in order to be liked, not make a fuss, or most importantly not get hurt. It’s opting to play it cool when a group of guys make a sexist joke, instead of speaking up and maybe being pegged the high maintenance bitch forevermore. Without realizing it I have learned these tactics throughout my life, of how to be agreeable, and have used them without even thinking. But recently I’ve had some unsettling experiences where the thought entered my mind that I was unfairly put in these situations because I was a girl, and that it was indeed, total bullshit.

A few weeks ago I was working alone in the shop. It was nearing closing time (Thank God! I just wanted to get home, order pho, and watch How To Get Away With Murder) when an older man came into the store. He was clearly drunk out of his mind and started rambling his entire life story to me. This is not the first time a drunk man has walked past the store, seen me alone, and decided I was the perfect person to engage in a squirm-worthy social situation – asking me stupid questions, staring me down, pulling their belts up, and for whatever reason, telling me about their daughters. Ew. In the past I’ve been the ‘smile, nod, be polite, and pray he leaves soon’ girl – so in this new scenario with, let’s call him Alberto, I attempted this maneuver – he did seem fairly harmless after all.

Part way through his rambling I started to grow weary of his level of comfort in his dominant position, leaning on the counter and little by little encroaching on my personal space. I started to stare out the window in the hopes that a passerby would see my strained expression, enter the store, and relieve me from this bumbling buffoon. This upset Alberto. He raised his voice, asked me why I was looking outside, looking away from him, looking at someone else. ‘Is he your boyfriend?!’, he insisted. This then opened up his one-sided conversation to an uncomfortable place I did not want to be. This large 68 year old man, cornering me in a small space, writing his phone number down, insisting I take it, wondering what the problem with our age difference was, leaning over the counter and giving me the old up and down, exclaiming I was ‘very nice’ (gag me). The friend I was stealthily texting on my computer told me to just tell him I was about to close the shop, but what I really wanted to do was tell him to $#@! off, grab him by his collar, and kick his sorry ass out the front door.

After his incessant whining as he tried to bequeath his number upon me I kind of snapped. I was sick of him staring at me, thinking that because I was a polite, nice girl that he could blatantly ogle me, that I would put up with his nonsense. I told him I wouldn’t be taking his number because I most definitely wouldn’t be needing it, nor did I want it. I told him to take as much Halloween candy as he wanted, and firmly told him to have a nice night and nodded towards the door. It worked! He left (after much creepy chuckling, and hoarding of Halloween chocolates in his pockets). The experience left me rattled though. Every time a man enters the store now, I tense up. I can’t help but wonder if he’ll come back, or if he’ll wait for me outside the store. It may be an overreaction, but it is completely possible, not unheard of, and it is not a feeling I like to have.

One final story, and I’ll get to my point. Yesterday I was beginning a conversation with a man on Tinder (you’ll notice I left the ‘gentle’ part out). He was feeding me pretty tired lines – ‘Go out for a drink with me and you’ll never have to go on Tinder again’, ‘I happen to know how to treat the right woman right’, ‘I just want to meet a nice girl and move on with my life’. I was fully aware that this reeked of playboy manure. I’m not going to lie though, I was mildly amused by this, and decided to continue the conversation – again – it was harmless fun. But then he said something that I (and my friends I’ve shared the story with) found really, just, gross. He told me he was creeping my Instagram photos to ‘see if I had a nice body’. COME ON! Again, instead of saying, ‘WTF IS WRONG WITH YOU, PIG!’, I passively said, ‘Umm, you shouldn’t admit that’. His reply was that physical attraction is important, and he’s not scared to say that’, then quickly moved on to the ‘What do you do for work?’ portion of the Q + A (and here I thought he was just talking T + A!).

It pissed me off that in one breath he was trying to prove he wasn’t like the other guys, that he was my prince charming and in the other he was being a shallow, chauvinistic ass. I decided I would not be continuing the conversation, and said, still remaining on the polite-ish side, “Not to be a bitch, but the body comment ain’t sitting well w/ me. Sawry”. His reply has had me fuming ever since I lay eyes on it, “That is the definition of being a bitch,” he told me, “You are on an app judging people on their looks but you get turned off when someone judges you. Grow up. Bye (pink girl waving bye emoji…)”. I would have loved to give him a whole spiel on his lack of tact, insight, or more importantly manners, but as my spiels have fallen on deaf ears in the past, I merely replied, “I would engage that comment and go into how the goal here is NOT to be objectified, but I think it would be wasted on you. Best of luck insert name of foolish goon.”

Listen – signing up for Tinder or any other dating app, does not mean I’m signing up to be treated any lesser than I would in a real life scenario. It doesn’t mean that I’ve agreed to the underlying assumption that the app is just for hooking up, and therefore you can talk to me however you like. Just because you’re shielded by the safety of your phone, you’re not completely anonymous, and you’re not excused the common courtesies of dating. Social graces and common decency are still at play here.

Don’t take advantage of my intrinsic politeness, you’re not special, I’m this way to everyone. Don’t use your larger size to put me in a position I don’t want to be in, one I can’t easily get out of – you don’t even know me. Don’t call me a bitch because I don’t appreciate being shamelessly demeaned or because I choose to reject you. Rejection is part of life my friend, and using insulting or belittling terms to retort is not going to prove your maturity to anyone, including yourself.  If you’re a man, know these little things add up, and do not bode well for our opinion of your kind, even if you do not land anywhere near this category. Know that it leaves an impression and makes it hard to trust you. Listen to our stories and don’t rebuff them as silly fodder that is the result of an overreaction – our feelings are valid. I’m not sure what else to say, other than place some value in the golden rule and treat others as you would like to be treated. Think of how you would want your sisters, cousins, or friends to be treated in a world where the odds are not always in her favour. It goes a long way.

Header Image: Me and You